Its legendary beauty notwithstanding, should you visit Santorini on a cruise?

Welcome to the poster child of Greece and the face that launched a thousand screen savers. Santorini, the southernmost island in the Cyclades, is one of the most photographed places on the planet.

Santorini owes its striking appearance to a dramatic geological event. Once a much larger island, a huge volcanic eruption blew its top – literally – creating a giant caldera. Seawater filled the cauldron-like hollow this created, forming an oceanic amphitheatre.

The island’s appeal hasn’t gone unnoticed by cruise lines. In 2018, 439 cruise ships called at Santorini, making it one of the most popular ports of call on Adriatic Sea cruises in the Eastern Mediterranean. But has this idyllic Greek island become a victim of its own success?

Getting your hands on a good guidebook to help you plan your Greek islands & Adriatic cruise, and to make the most of your time onshore, is a wise move. I’m a big fan of Rick Steves and this edition is packed full of useful information.

Why you should visit Santorini on a cruise

Even if Santorini’s geological genesis doesn’t float your boat, its good looks might. Picture whitewashed houses teetering on the rim of the caldera, before spilling in waves down the vertiginous cliffside.

Amidst the island’s white townscapes, the domes of Orthodox churches provide splashes of cobalt that merge harmoniously with other hues of blue; the azure sky, the turquoise sea. White windmills, high on the cliff, keep a careful watch over the sea.

Whilst undeniably scenic, the use of whitewash on Santorini was borne out of practicality. Houses were constructed from the only material available, black volcanic rock, and painted with limestone. This was not only easy to source but was also an effective antibacterial, disinfecting rainwater that collected on the rooftops.

Santorini’s beauty is epitomised by Oia, the island’s tourist magnet.  Pronounced “ee-ah,” this is what comes to mind when most people picture a Greek village.

Renowned for its spectacular sunsets and viewpoints across the Aegean, this is an idyllic blue and white patchwork of buildings lining cobblestoned lanes, punctuated by the occasional dozing cat.

Whilst Santorini’s villages and resorts cling to its coastline, much of its parched interior is occupied by vineyards. Long before tourists descended on the island, grape cultivation was one of its main sources of income.

If your experience of Greek wines is Retsina, prepare to re-educate your palate. In contrast to the pungency of Retsina, the white wines from Santorini are excellent, crisp and dry with a citrusy aroma. But the real revelation was Vinsanto, an amber-coloured dessert wine made from sun-dried grapes.

For a small charge, a handful of Santorini’s vineyards offer tastings with local cheeses and olives. We visited Santo Wines, a cooperative representing all the cultivators on the island, which offers a guided tour and wine-tasting packages.

Santorini is home to some of the oldest vineyards in Europe, its grapes cultivated by its first inhabitants in around 3000 BC. These vineyards were destroyed when the island was buried under a thick layer of volcanic ash following the Minoan Eruption in the 17th Century BC (the exact date is disputed).

Another result of this devastating eruption was the creation of Santorini’s very own Pompeii. A Bronze Age city in the south of the island was buried – and preserved – in ash, giving us a fascinating insight into life on the island 3,000 years ago. Although the site has been christened Akrotiri after the nearby modern town, its identity is not known.

Considering pre-historic man in other parts of the world lived in caves, life in Santorini was remarkably advanced. Its residents lived in two and three-story houses, which not only had rooms decorated with fine frescoes, but also hot and cold running water, underfloor heating and toilets. And they appreciated wine.

Walking along the suspended, wooden walkways that lace through these partially excavated ruins, you can pick out individual buildings, pathways and sewage systems. The feted frescoes are displayed at the Museum of Prehistoric Thira in Fira, Santorini’s main town, and in National Archaeological Museum, Athens.

It’s not clear what happened to Akrotriri’s inhabitants. No human remains, or those of domestic animals, have been found. It’s thought that foreshocks gave the town’s residents enough time to gather their livestock, pack valuables and flee the city, probably escaping by boat. But where they went next is a mystery.

It costs €12 to visit the ruins of Akrotiri. Although I visited the site on a guided tour as part of a ship’s shore excursion, it can also be reached by bus from Fira. Check here for opening times.

Why you shouldn’t visit Santorini on a cruise

Santorini is the quintessential Greek dream destination. Moreover, it is one that produces excellent wines and also boasts a fascinating archaeological site. So why should you avoid visiting it on a cruise?

The reason is simple: the crowds.

In sharp contrast to its economic woes, Greece has experienced a tourism boom. In 2013, the country welcomed 20 million visitors to its shores. By 2017, this number had exploded to over 30 million. (UNWTO )

Whilst the increase in visitor numbers is propping up the Greek economy, it has created strains on its infrastructure and environment, and has resulted in overcrowding.

Santorini is at the forefront of this boom and is at breaking point. This growth has been turbocharged by social media, Instagram in particular.

An estimated two million people visited Santorini in 2018, lured there, at least in part, to capture iconic images of its townscapes and of the sun dipping in a fiery orange globe behind Oia’s windmills. The island is social media gold and at the time of updating this article (April 2020) close to six million Instagram posts have been tagged with #santorini.

I didn’t experience the sunset on Santorini, but others have reported crowd carnage, with visitors jostling for prime position from which to capture the best image to garner likes for their social media feed. However, even in the daytime, Oia and Fira felt like they were bursting at the seams.

When I visited Santorini on an Adriatic Sea cruise from Venice to Greece, there were four ships anchored at Thira, the port town on Santorini’s western coast, when I visited in early October. These ships were dropping anchor, and disgorging their collective volume of 10,000 passengers, at around the same time. And this was a relatively quiet time of year.

That’s a lot of people wandering elbow to elbow the narrow lanes of Oia and Fira, browsing in their shops and eating and drinking in their cafes and restaurants. They follow the same well-trodden route, replicating the same photographs viewed in glossy travel magazines. You stand a far better chance of being poked in the eye with a selfie stick or being shoved by someone than being able to appreciate Santorini’s spectacular views.

Let’s also consider the logistics of coming ashore. From the cruise ship, you need to jump on a tender boat which takes you the short distance to the port. A cable car then whisks you up to Fira, on the rim of the caldera.

Sounds easy enough? Let’s return to those 10,000 cruise passengers flocking ashore.  Considering the cable car has a capacity of 1,200 people per hour (600 per hour in each direction), it isn’t a stretch to do the maths.

Fellow passengers reported waiting times of an hour and a half to board the cable car. Rather than wait, they took the steps up the steep cliffside to Fira. Not only was this a strenuous 45-minute walk in the morning heat, but on more than one occasion they only narrowly avoided donkeys careering their way back down to the port to collect more human cargo (I won’t even go there!).

In 2018, in an attempt to ease the crowds in Santorini, the island’s mayor imposed a daily cruise passenger limit of 8,000. However, as cruises are booked two years in advance, this will not be in full force until 2020.

But even with this restriction on the number of people allowed ashore, visiting Santorini on a cruise is the worst way to see the island. Forget about learning more about everyday life on the island and experiencing authentic Greek culture Given the limited time onshore, all that you can hope to achieve is to visit the crowded tourist magnets.

I’m not saying that you shouldn’t visit Santorini. It is spectacular, but its beauty is outstripped by its crowds.

Staying on the island for a few nights may be the only way to appreciate it, allowing you to escape from the cruise crowds swarming the main hubs. Moreover, you will be able to value Santorini as a destination rather than a hashtag.

2 thoughts on “Should You Visit Santorini on a Cruise?” 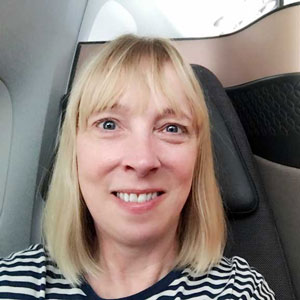 Hello! I’m Bridget, a London-based travel writer with perpetually itchy feet. Let my experience of solo travelling to 60+ countries over three decades help you find your perfect travel adventure with a twist of affordable luxury.